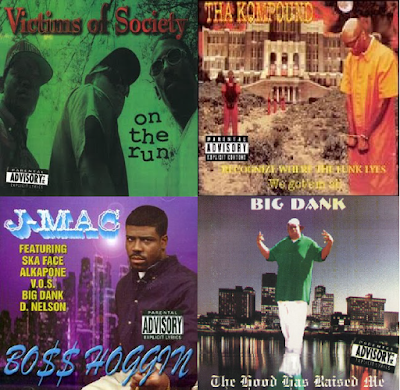 This rap label from Little Rock, Arkansas was founded by Mark Jones in the mid-90s. During a short period between 1996-1998 they released four albums. Big Dank & Victims Of Society (Money Green, GAK and Black) released The Hood Raised Me and On The Run in 96, two great southern funk records. Then in 98 St. Louis rapper J-Mac came to Little Rock and released another well produced album on the label called Boss Hoggin. In the same year Pup Dog released a compilation album named We Got Em All - Recognize Where The Funk Lyes. The label is forgotten today, but during 96-98 they produced some of the best G-Funk in the south.

I found a cassette by big dank and he is awesome, do you have any other information about him? Did he release any other albums