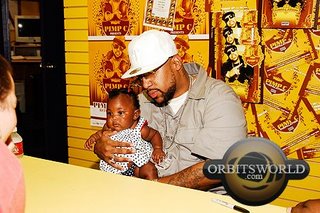 Houston, TX - "I’m Free" track 2 to Pimp C's Rap-A-Lot/Asylum album 'The Pimpalation" , with the best sample use of the Tom Petty classic "Free Falling" possible, and on Track 3 as Pimp-C let's us all know exactly how he feels about being back and the current state of Hip-Hop with “Knockin Doorz Down” feat. POP & Lil KeKe . Pimp C certainly has come back, with a vengeance with this album. With initial retail request in high demand this album shipped Gold. The “Pimpalation” debuts on Billboard at #1 in the Urban / Hip-Hop category and #3 on the Billboard Top 200 charts respectively, with its first week's sales. Fan's of Pimp C have waited four long years for some more heat from this Houston legend and `he has given them sixteen tracks full of the classic Port Arthur style that has earned him the monikers of 'pioneer' and Underground Kings. Each track on this compilation features some of the best that the South has to offer with names like Lil Keke, Jazze Pha, Scarface, Chamillionaire, 8-Ball & MJG, Trae, Jagged Edge, Z-Ro, Ali & Gipp and of course Bun B all making appearances at the mic with their boy. The production is definitely mostly classic Texas, with turns at the boards being taken by Mike Dean, Cory Mo, Clay D, Mr. Lee and of course Pimp C himself with some Jazze Pha and Mannie Fresh thrown in for good measure. The album is Executive Produced by none other than the CEO of Rap-A-Lot, J Prince himself; along with Pimp C, as if anyone else could have done the job. Its debut follows on the heels of similar debuts by legendary artist like Bun B, Trae and Scarface and is bound to reach the classic status of other Rap-A-Lot notes like Geto Boys, Devin the Dude, Z-Ro and UTP. If you don't pick one up, you are bound to hear it anyway - banging from a stereo near you.
Posted by JB at 1:48 AM